At Barbridge Marina we have extensive moorings along both banks of the Middlewich Branch of the Shropshire Union Canal with the capability of berthing up to 70 narrow boats. Sometimes we also have some space available for casual moorers, so please call if you require a temporary mooring.

The towpath is on the opposite side of the canal and access to the marina facilities is across 'Wardle Roving Bridge No.1' at the canal junction. The marina side moorings (pictured above) are grassed with no towpath, but on the same side as the boatyard facilities and car parking area.

All moorings enquiries and payments are administrated through our Penkridge office.

or send an email via our 'Contact Us' page 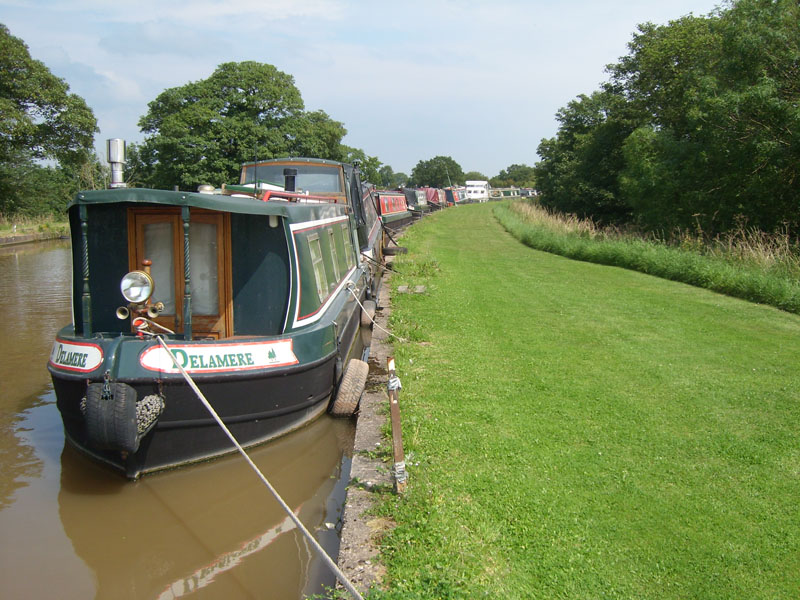 Our moorings are located at the junction of the Shropshire Union Canal and the Middlewich branch which enables cruising in all directions. North to Chester, South to Nantwich and beyond, West on to the Llangollen Canal and East onlong the Middlewich Branch of the Shropshire Union Canal to the Trent & Mersey Canal which provides many more miles of canal network to explore and enjoy. 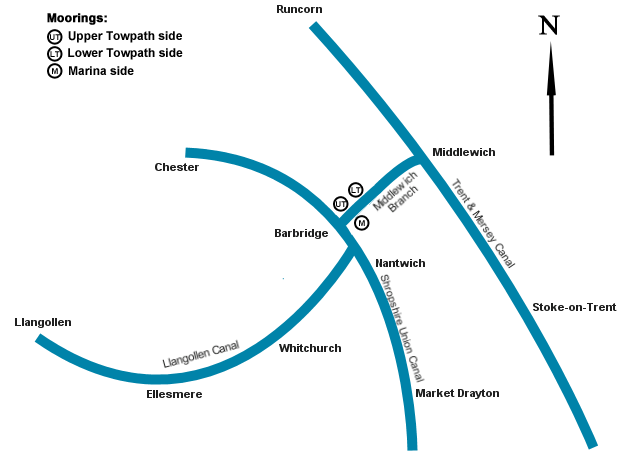 Midway Boats has been managed and owned by the current owners since 1992, but there has been a boatyard on this site since the 1960's. The marina is family run and offers the personal attention and a warm friendly welcome.

Approximately 100m from Barbridge Junction and Barbridge Roving Bridge No.1, our marina is capable of providing moorings, depending on sizes moored, for up to 70 river cruisers and narrowboats on both sides of the canal. We usually have a good selection of quality used narrowboats and river cruisers available to purchase, but we can also buy boats in for stock without an outgoing sale.

Our chandlery has a wide variety of products to assist with maintaining your life on the waterways.

A day hire narrowboat is available to rent for a one off single day's enjoyment and is perfect for celebrations, special events or just for a day's cruising the canal. Although this day hire boat is not allowed through any of the locks, there is still up to 10 miles of canal to explore in three directions, enough for a day's crusing. 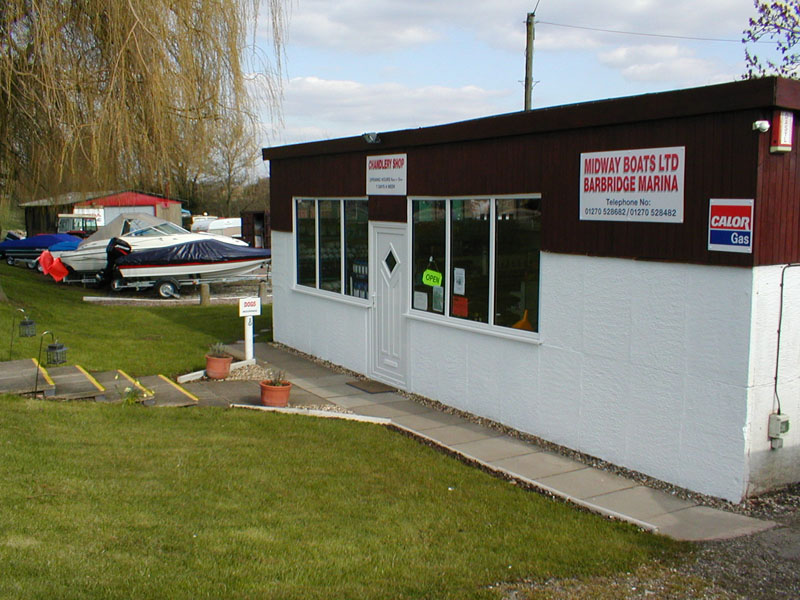 More About the Shropshire Union Canal

The maximum dimensions for a boat to be able to travel on the waterway are 72 feet long and 7 feet wide. The maximum headroom is 8 feet. The maximum draught is 4 feet and 10 inches.

The navigational authority for this waterway is Canal & River Trust.

The canal lies in the counties of Staffordshire, Shropshire and Cheshire in the north-west midlands of England. It links the canal system of the West Midlands, at Wolverhampton, with the River Mersey and Manchester Ship Canal at Ellesmere Port, Cheshire, 66 miles (106 km) distant.

The Shropshire Union main line runs southeast from Ellesmere Port on the River Mersey to the Staffordshire and Worcestershire Canal at Autherley Junction in Wolverhampton. Other links are to the Llangollen Canal (at Hurleston Junction), the Middlewich Branch (at Barbridge Junction), which itself connects via the Wardle Canal with the Trent and Mersey Canal, and the River Dee (in Chester). With two connections to the Trent and Mersey (via the Middlewich Branch and the Staffordshire and Worcestershire Canal) the Shropshire Union is part of an important circular and rural holiday route called the Four Counties Ring.

The Shropshire Union main line was the last trunk narrow canal route to be built in England. It was not completed until 1835 and was the last major civil engineering accomplishment of Thomas Telford.

The name "Shropshire Union" comes from the amalgamation of the various component companies (Ellesmere Canal, Birmingham and Liverpool Junction Canal, Montgomeryshire Canal) that came together to form the Shropshire Union Railways and Canal Company. The main line between Nantwich and Autherley Junction was almost built as a railway although eventually it was decided to construct it as a waterway.