The History of Midway narrowboats

« back to the New Build narrowboats

The very first Midway, a 295 (29.5ft) was built in 1992 when the company was owned by Steve Batty. In those days there was a demand for small, affordable narrowboats with the likes of Springers being very popular at the time. Knowing they could build a better small boat, Steve together with Mick Sivewright building the steelwork, created the Midway range.

Up until 1999 the range consisted of the 235, 265 and 295. In the early days, steelwork for the 235 and a few 265’s was constructed by Mick Sivewright, who at the time was also building his own range, the Owl class. The Midway 235 and a Sivewirght owl are very similar craft and often get mistaken, the giveaway being the Midway had a slightly ‘pointier’ bow and tubular hand rails, the hand rails on the Owl being integrated. Early 235’s were offered with the option of either a 9.9hp or 15hp petrol Honda outboard. Shortly after the first builds and following demand, the option for a diesel inboard was introduced with the choice of either Vetus or Beta Marine.

Steelwork for later 265’s was constructed by Piper with the 295 being built by Mancunian Narrowboats. All Midway boats were fitted out at Barbridge Marina, Nantwich.

In 1999 a Midway 310 (31ft) cruiser was introduced and up until 2004 this was followed by the 355 and 390 cruiser style and the 410, 480 and 550 semi trads. Steelwork for all of these being built by Cauldon. From 2005 onwards, Price Fallows handled the steelwork and from 2012 Tyler Wilson until production stopped in 2016, ending a run of approximately 120 boats. The final craft using Tyler Wilson hulls were mostly all 58ft, high spec liveaboards. The next chapter in the Midway range began in 2019 when the owners of Bourne Boat Builders bought Midway Boats off Steve Batty. Their plan is to now re-launch the Midway brand with the 470 and 580 and the first of these should appear in Summer / Autumn 2020. 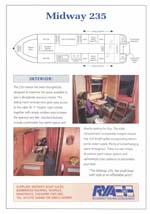 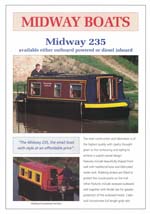 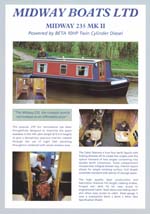 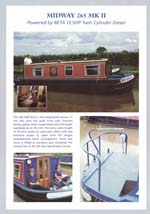 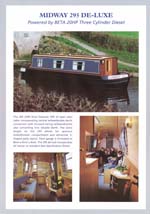